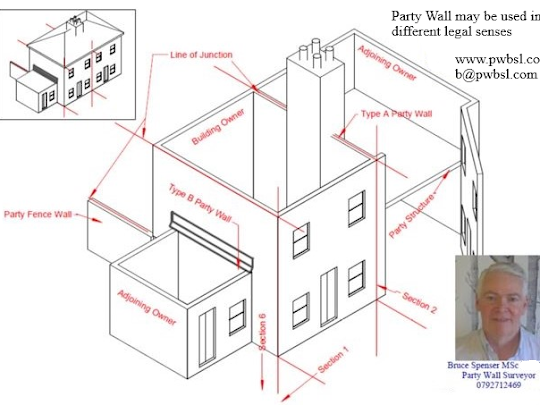 Bruce acts as the Party Wall Surveyor for the Building Owner carrying out the Works, the affected Adjoining Owner or as the Party Wall Third Surveyor.  In a small and simple domestic situation Bruce will act as the agreed surveyor which is a sensible and cost-effective option for the parties.

Bruce acts  throughout England and Wales.

A building owner has extensive rights under the party wall act including rights to entry but to exercise these rights  they must serve Party wall notices, which are time limited, upon any affected adjoining owner at a set date prior to the intended works.  The adjoining owner then has reciprocal rights and must consider their options.  When a party wall dispute arises both owners, utilising due diligence, must either appoint an agreed party wall surveyor or appoint one Party Wall Surveyor each and in that case the first duty of the two surveyors is to select a party wall third surveyor and if they can’t agree the Party Wall Act allows the party wall delegated Local Authority officer to make that appointment.

The first question a Building Owner or Adjoining owner confronts is what is a Party Wall Surveyor and how to find and appoint one; Party Wall Surveyors should be correctly qualified, understand, interpret and advise on law and must reflect on their practice which provides a further selection factor by viewing their blog or posts.  The Party wall surveyors should be expert in dispute resolution, risk analysis and the psychology of disputes.

An owner who appoints an inadequate party wall surveyor will cause the dispute to escalate. Section 10 (6) and (7) of the act allows for dealing with and the removal of ineffective Party Wall Surveyor or surveyors who refuse to act effectively.   Once validly appointed the agreed Surveyor or the two surveyors must visit site and determine what is a Party Wall and is it a Type B Party Wall, a Type A, a Party Structure, a Party Fence Wall or not a Party Wall at all?  They then consider the impact of the Building Owner’s works on the Adjoining Owner and their property and take a schedule of conditions. They should then agree an award which allows the Building Owner to expeditiously proceed with their lawful works whilst fully recognising and protecting the interests of the Adjoining Owner.

The Party Wall Award settles the dispute and may include the fee of the surveyors and therefore allows the surveyors to recover fees and of course for owners to contest Party Wall Surveyors who claim unreasonable fees – an invalid Party Wall Award may be ignored.  The adjoining owner may request security for expenses which can take many forms but notably by escrow and bond and payment for works done.

If a Building Owner does not serve  notices a prohibitory injunction should be sought.

The Party Wall Act is a statute; it was initially read pedantically and by reference to other statutes and old case law.  However modern Party Wall case law is more and more  veering towards common sense interpretation and its spirit.  The act does not interfere with easements or rights of light but legal principles, statutes, regulations, doctrines and law do apply ie estoppel, negligence, Consumer Protection, Misrepresentation, frustration but importantly Road Runner (case law) stated that the act suspends common law.  The act has a long history, as can be better understood by viewing its chronology and the first Party Wall Surveyors can be traced back a millennium. Bruce has produced a guide for owners, surveyors and aspirant Party Wall Surveyors.  There is currently one amendment to the act which allows for electronic communications and there is recent case law which expands considerably the methods available to serve party wall notices etc.

The Party Wall Act gives considerable powers to the Surveyors including the settling of Boundary Disputes and a section 10 award is NOT restricted to dealing with those matters about which the building owner and the adjoining owner disagree.